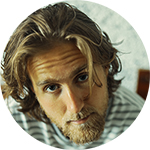 Caoivín is an Irish neo-traditional musician currently based in Dublin. Born into a musical family, he began playing traditional Irish music at the tender age of 5 and spent the majority of his early childhood summers travelling to and from various different fleadhs and music weeks. In his late teens and early twenties, Caoivín began to develop an interest in a number of genres outside of the traditional Irish music realm, in particular various forms of dance and electronic music. Caoivín’s creations are influenced by the range of styles which he has been exploring from that point up until now, while being rooted at the same time to the long unbroken lineage of traditional music on which he was reared.